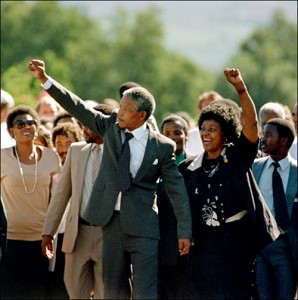 African National Congress (ANC) leader Nelson Mandela and wife Winnie raise fists upon his release from Victor Verster prison, 11 February 1990 in Paarl. After the banning of the ANC in 1960, Nelson Mandela argued for the setting up of a military wing within the ANC. On June 12, 1964, eight of the accused, including Mandela, were sentenced to life imprisonment. Nelson Mandela was released 11 February 1990. AFP PHOTO ALEXANDER JOE